We have Celebrities in Regina? Well yes we do! Let me tell you, they are an excited and community engaged bunch of people too. Personally I think you would have to drag me kicking and screaming to do a pie eating contest. Every single one of these contestants practically begged me to part of it! That my friends is the power of the Celebrity Pie Eating Contest. There has been smack talking and plans on how to cheat on twitter. It has all been quite amusing for this Market Manager. Like really, you want to try and get the Market bakers to make cheat pies? Wow, they will go to any length to win.

Here is the list and bios of the 2013 Celebrity Pie Eaters:

James is famous in his own home. He is a hero single dad to our favorite Market girl, Mighty B. He drives a school bus in Regina. He is a vegan and avid napper. He likes big naps and he cannot lie! He is one of our most loyal and engaged twitter followers.

This dapper and debonair man (for reference click here). Oh yeah Justin, I went there. And I stalked your website and I was all over your Instagram. Thanks so much for making me struggle to find a decent picture of you that didn't involve Green Spot cinnamon buns or weird curls on the top of your head. You have to live with the fact that I got the redhead to give up a picture of you. So far I have more influence. Justin is currently a freelance graphic designer who works as a cook at Beer Brothers. You have to go here to see what is inside his head. Go forth with this caution: It might be too awesome for your brain to handle. I think he is about 7'6" to 8" tall. He likes one redhead and he cannot lie. GREEN Spot, Justin, GREEN!

Kerri classifies herself as a "singer/songwriter” and an “entertainer". But there is much more going on in this lady's life. This life long Regina resident and single mother is an active community member. She has volunteered with and advised a number of organizations and events, including RSO, Break Out West, and the Arts Advisory Board with the City of Regina. She is also described as the Fresh Face of Access Communications on Talk of the Town and acted as advisor to Victor Lam on Regina's reality TV Show Lamb of Love.

First, I must say it is impressive that that she got the Canuck handle for her twitter. She must have come on when twitter was born. Leasa is one of those people you never can forget once you've met her. Engaging, smart, funny, and in the know! She was once an Analyst at the University of Regina, Executive Secretary and later Manager of Crown Investment Corporation. She was Manager of the Saskatchewan Angel Investor Network. She is currently a team member with Conventions Regina and the Manager of Marketing and Communications at Regina Downtown. She was even once in the Canada Winter Games biathlon. Now that we are done saying her Linkedin profile, what is she really? I'm every woman was the song written for her. She is a mom of two young ladies. She is someone that makes me laugh every day at our office. She has a way of getting you to do things for her with her ever enticing smile. She has her own abbreviation when life gets frustrating. Only 3 of us know it. She is a Downtown Celebrity for sure.

Raquel Fletcher was born and raised in Saskatchewan, and is a graduate of the University of Regina School of Journalism.  After completing her degree, she spent five months working in Ghana, West Africa as a freelance writer/photographer and reporter with Skyy News Television Takoradi. Raquel has been an active volunteer with Journalists for Human Rights. She also speaks French and loves to travel. She joined the Global Regina news team in January 2013 as a reporter and anchor. There are many things we know about Raquel that we are not allowed to reveal so we will leave it with a nice professional description. Do not be fooled by the small one. Her sister says she could out eat two truckers who haven't eaten for three days. Well she kind of said that.

Taron is an absolutely fascinating guy. He is a father to a super cute little girl and a husband. He is a Sask Music Board member, a CTV Morning Live Music Commentator, a Graphic Designer for Imagination Ink, and Sign O Rama. Currently Taron is Account Coordinator for Look Matters. He was the Creative Director and Promotions Manager for Regina Symphony Orchestra. Taron does plenty of public speaking and writing too. The guy is famous. Even a City official who was here earlier knew who he was. He makes a mean pie eating playlist too.

Vance is The RFM's Vice President and Chair of our Human Resources Committee too. So you understand if I don't say much about him. I hear he knows how to fire people. Actually Vance is great guy to work with (for?). He helps the Assistant Manager and I realize our freedom to be our best. To me he is famous just for that. But he has had a life before RFM. Originally Vance is scientist/biologist specializing in wetland ducks. He went on to Human Resources work in the University and currently works as a consultant. He is proficient in Facilitation and Visioning work. Vance is married to the lovely Sue Echlin and together they run Living Sky Winery. The winery has won awards across North America. Their business only continues to grow and thrive. Last year the Vance won the Saskatchewan and Canadian Outstanding Young Farmer of the Year Awards! He currently holds the distinction of the 2012 Pie Eating Champion of the Regina Farmers' Market. He is rarely without his cowboy hat! He's the man for all 7 to beat!

This article got very long. So I will be doing a separate article on the rules of the Celebrity Pie Eating Contest next. Ada. 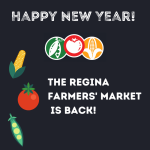 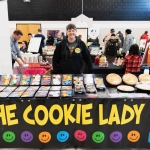 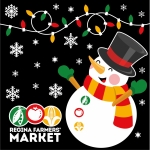