Betty Hutton: Our Past Manager

Thirteen years ago I met Betty Hutton. She was the Manager of the Regina Farmers' Market and I was the Cathedral Arts Festival Street Fair Coordinator. Every year the Street Fair sets aside a number of spots at the Angus and 13th Avenue intersection for Market Members. In Regina there aren't a great deal of Event Coordinators. It was so nice to connect with someone who understood what it was like to organize and run similar events. For the next six years we talked on the phone in the Spring and I would meet her at the Market to get the vendors' fees.

Betty was Manager from 1994 to 2006. She had a car as her office parked in the middle of the street. She was strict with her vendors. For so small a person she was tough. You followed the rules if you were a Member! She was ill even at that time and walked the Market towards the end of her Managership with an oxygen tank. I called in the spring of 2007 to set up the Market Members as usual. She said, "Oh Ada I am not working there anymore! I have been getting worse and my doctor has insisted that I quit. I have retired now and they are looking for a new Manager. Hey, would you be interested in the job?". Other Members of the Market knew me through the Street Fair and they put my name forward too, but Betty was the first one to recommend me.

I kept up on how Betty was doing through her brother and sister in law, Murray and Sharon Wallace, who run Sharon's Pies at the Market. Her health improved over the next couple of years. She played cards with another Market Member Irene Toth and I heard she was enjoying her retirement. Her son Greg worked as our table truck driver. Pearl always came to the Market too, she used to be Betty's assistant. I always heard from them that Betty was doing well.

On Thursday I recieved a message from a Member that Betty had passed away on Wednesday February 13th, 2013, just a day away from her birthday. Betty will be remembered as being a no nonsense Manager who persevered daily despite her health. We at the Market send our condolences to her family. Her funeral will be held at Regina Funeral Home at 7pm, Saturday February 16th, 2013. Ada Bennett 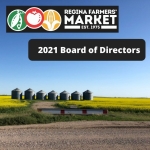 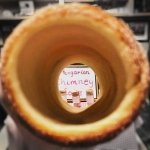 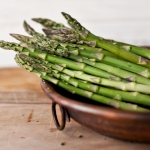